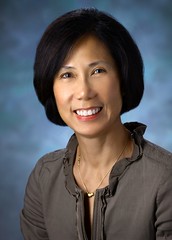 In a single center prospective trial, we treated 41 cases of neoplastic Barrett’s esophagus with low-grade dysplasia, high-grade dysplasia, and intramucosal adenocarcinoma, with cryoballoon ablation and without prior endoscopic mucosal resection. About half of the patients had failed prior ablation therapy.  At 1 year, the dysplasia was completely eradicated in 95% of cases, and all Barrett’s esophagus was eradicated in 88%.  These results are comparable to those reported for radiofrequency ablation, which is the most established and scientifically proven technique. Moreover, patients had short-lived mild pain, not typically requiring narcotic analgesics, suggesting it is better tolerated than RFA. This study highlights the potential for cryoballoon ablation as a complementary eradication technique in treatment-naïve and resistant Barrett’s esophagus. 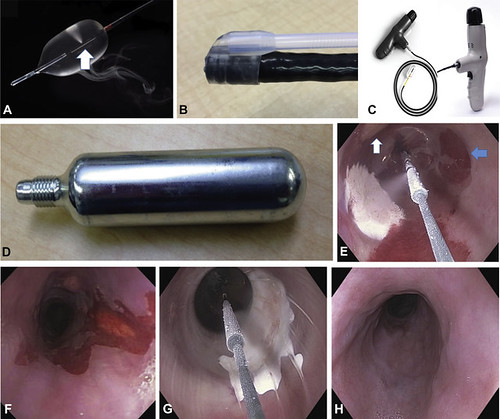 Figure 1. A, Focal cryoballoon with nitrous oxide released from the diffuser (white arrow). B, “Side car” attached to a standard channel endoscope for passage of cryoballoon catheter. C, Cryoballoon catheter attached to the battery-powered “gun-like” handle with the controller that holds the nitrous oxide capsule (D). E, Endoscopic image of Barrett’s esophagus seen through the proximal cryoballoon with an approximately 2-cm-wide ice patch after 10 seconds of cryogen released from the diffuser at the center of the cryoballoon. There is another partially thawed ice patch at the 11 o’clock position of the image (white arrow) and treated area of mucosa with immediate cryoablation red color change noted a few minutes after the ice melts (blue arrow). This facilitates targeting and complete ablation of focal or extensive Barrett’s mucosa. F, Endoscopic image of residual dysplastic Barrett’s esophagus proximal to and within a well-healed chronic radiofrequency ablation chronic stricture. G, Endoscopic view of the cryoballoon with resulting ice patch across the stricture and without balloon-related mucosal tear. The low inflation pressure is regulated and maintained by software in the controller to a maximum of 3.5 psi. As a safety feature, the balloon automatically deflates if the pressure exceeds 4.5 psi (well below the pressures exerted by through-the-scope endoscopic balloon dilation systems, which are at least 10 times greater).

Consequently, we are conducting a multi-center large American clinical trial that will confirm these findings. There is also a multi-center U.S. trial soon to open that will study the safety and efficacy of cryoballoon ablation in resistant BE. Cryoballoon ablation is also user-friendly, technically easy, quick, and less expensive than RFA or spray cryotherapy because the devices are disposable.