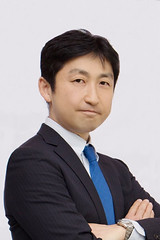 Endoscopic submucosal dissection (ESD), although routinely performed, can prove to be challenging in areas where endoscopic mucosal resection (EMR) has already been performed because of scarring and fibrosis. A 79-year-old woman with a 20-mm tumor in the sigmoid colon was referred for ESD. A polyp had been removed from the same region, in piecemeal fashion, 5 years earlier. This had left a scar on the left side of the lesion. We started ESD from the anal side using a specially designed scissors-type knife called the Stag Beetle Knife Jr (SB Knife Jr, Sumitomo Bakelite, Tokyo, Japan). Once the mucosal layer was seen, we identified a tumor that was growing into a diverticulum, which is a muscle defect in the colon. The surrounding tissue was severely scarred, which made ESD extremely difficult. First, we carefully removed the scar tissue, leaving a part of the adjacent diverticulum. After that, using the Stag Beetle Knife, we could proceed with surgical removal of the tumor by carefully grasping and pulling the tissue alternatingly. This was made possible by the scissor-like action of the knife, which allowed us to grasp the tissue. The patient was re-positioned so that different parts of the tissue could be accessed. The end result was that the lesion was wholly removed without unnecessary damage to the colon. The surface of the tissue, including the muscle defect, was closed with clips to avoid perforation in the future. Pathologic findings revealed a high-grade tubulovillous 17×12-mm adenoma with a negative margin. The patient was discharged several days later without complications.

ESD can be useful for complete surgical removal of large and ulcerated lesions, but it can be challenging in cases where EMR has already been performed. The EMR procedure can create tough, fibrous tissue around the tumor site. In addition, lesions invading a colon diverticulum are considered contraindications for endoscopic treatment because of the risk of perforating the colon, as there is no muscle layer. We found that after removing the fibrous tissue, the scissors-type knife makes it possible to grasp the target tissue, allowing a controlled dissection. Reducing the risk of perforation is very important.

When confronted with cases where the removal of tumors from certain regions is challenging due to the presence of surrounding scar tissue or in areas at high risk of inadvertent damage, endoscopists may use a scissors-type knife (like, the Stag Beetle) to attempt a safe removal of a tumor.

The presence of a diverticulum or scar tissue in the vicinity of a tumor often discourages endoscopists from attempting ESD to remove the tumor because of the risk of perforating the tissue. We show that the use of a scissors-type knife can help overcome such issues and safely treat the patient.