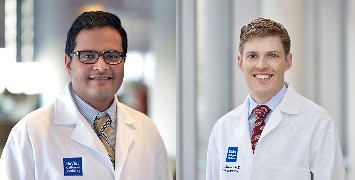 Post written by Ashish Sharma, MD, and Robert J. Sealock, MD, from the Department of Gastroenterology & Hepatology at Baylor College of Medicine in Houston, Texas, USA.

An 80-year-old male presented to the GI lab for an endoscopic retrograde cholangiopancreatography (ERCP) for gall stone pancreatitis and high probability of choledocholithiasis. He developed an iatrogenic duodenal bulb perforation from the duodenoscope. The perforation was immediately closed using an over-the-scope-clip (OTSC) with the creation of an omental patch.

Views of the perforation from the duodenal bulb revealed the size to be approximately 10 mm in diameter. The perforation was closed with an OTSC, type T, with a cap diameter of 12 mm and a cap depth of 6 mm. View of the closure site revealed a significant amount of omental fat contained within the clip. Enterogram did not reveal contrast extravasation from the site of the clip placement. CT scan revealed a moderate amount of peritoneal and retroperitoneal free air without oral contrast extravasation.

Two days later, the patient developed hematochezia and orthostasis necessitating blood transfusion. An EGD was performed. EGD revealed pulsatile bleeding from the omental patch. The bleeding was successfully treated with the placement of 3 hemostatic clips. The omental patch was then infiltrated with epinephrine of a dilution of 1:10000 via a sclerotherapy needle. No further bleeding was observed and the patient was discharged one week after his index procedure.

This video demonstrates how ERCP-related Type I perforation (lateral duodenal wall perforation) can be successfully managed endoscopically without need for surgery. An OTSC plays a critical role in the endoscopic management of this adverse event, and should be available for all endoscopic procedures. The creation of an endoscopic omental patch during closure of the duodenal perforation was unintentional in our case. Use of accessory devices (anchor and twin grasper) may allow approximation of the defect and avoid omental clipping. This video also demonstrates a rare case of upper GI bleeding from an endoscopically created omental patch. The bleeding was endoscopically controlled with standard hemostatic tools (hemoclips and submucosal epinephrine injection).

An OTSC can be used to successfully close Type I duodenal perforations during ERCP. Use of the accessory devices (anchor and twin grasper) may avoid omental clipping. Omentum is a highly vascular structure; therefore, GI bleeding can be an adverse event of an endoscopically created omental patch. Bleeding can be successfully managed by the use of routine endoscopic techniques such as epinephrine injection and hemostatic clips.