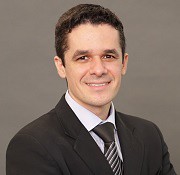 A 61-year-old female presented with poor appetite, weight loss, and diarrhea. CT scan from outside hospital showed no significant abnormalities. Further investigation with MRI revealed a 1.4 cm cystic lesion in the body of pancreas with wall thickness and enhancing nodule, suggestive of a cystic neoplasm with worrisome features (Fig. 1A). The patient was then referred for endoscopic ultrasound (EUS) with possible EUS-guided fine-needle aspiration (EUS-FNA).

EUS showed the pancreatic lesion with the same worrisome features described previously by the MRI (Fig. 1B). However, examination with Doppler revealed an intensely pulsating mass with connection with a surrounding artery, which raised concern for the diagnosis of pseudoaneusym with partial thrombosis mimicking the solid components. Patient was then successfully treated with angiographic embolization (Fig. 1C). She had no pain or bleeding episodes in 3-month follow-up. Interval CT scan of percutaneous embolization showed complete exclusion of the aneurysm. The underlying cause of her diarrhea was presumed to be irritable bowel syndrome, once workup results were unremarkable.

Figure 1. A: An enhancing nodule was seen in the MRI, suggestive of a cystic neoplasm with worrisome features. B: Examination with Doppler revealed an intense vascular flow, and connection of the lesion with a surrounding artery. C: Fluoroscopic image after treatment with angiographic embolization.

This is an unusual case of a pancreatic pseudoaneurysm mimicking a cystic neoplasm with worrisome features in a patient with no past medical history of pancreatitis. Presentation of a pseudoaneurysm may range from an incidental finding (like in this case), up to hemodynamic collapse from severe bleeding. EUS is an important tool in this diagnosis.

Detailed examination of a lesion referred for EUS-FNA with Doppler is always recommended to avoid the puncture of vascular structures.