Post written by Guru Trikudanathan, MD, from the Division of Gastroenterology, Hepatology and Nutrition, University of Minnesota, Minneapolis, Minnesota, USA. 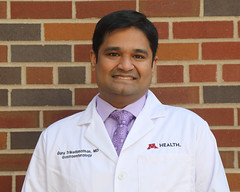 Visceral artery pseudoaneurysm (PSA) after necrotizing pancreatitis (NP) arises from enzymatic degradation of the arterial wall by the pancreatic enzymes or infection, direct erosion by necrosis, or traumatic injury to small arteries during interventions resulting in weakness and rupture.

Incidence and natural history of PSA in the setting of NP has not been widely studied. Endoscopic step-up approach for management of NP has evolved significantly with the use of lumen-apposing metal stents (LAMSs).

PSA can occur throughout the course of NP with a potential to cause a deleterious impact on its clinical outcomes. Given PSA’s uncommon occurrence in NP, our understanding of its incidence and clinical course, particularly in the setting of the endoscopic step-up approach, is limited.

A prospectively maintained database of all patients with NP is managed at our institution and by the entire spectrum of minimally invasive interventions available. A considerable number of NP patients were managed by LAMSs, reflecting the contemporary management practiced in many centers. Thus, we were uniquely positioned to study this uncommon entity and assess its relationship with interventions (endoscopic/percutaneous/surgical), specifically with LAMSs.

The incidence of PSA in our study was 6.4%. Acute blood loss anemia in the setting of overt GI bleeding (hematemesis, melena, bloody output from nasogastric/nasojejunal tube, and hematochezia) was the most common presentation, with patients needing a median of 5 units of blood transfusion.

Splenic (49%) and gastroduodenal (28%) arteries, which are in close proximity to the pancreas, were the most commonly involved arteries. The incidence of PSA was not impacted by the severity of the disease (as assessed by systemic inflammatory response syndrome [SIRS] on admission, persistent SIRS, organ dysfunction, and persistent organ dysfunction) or the presence of infected necrosis or any interventions for NP.

In fact, 7 patients developed PSA without undergoing intervention. Interestingly, the choice of initial cystenterostomy stents did not impact the incidence of PSA. However, an earlier development of PSA after endoscopic transluminal drainage with LAMSs was observed (44 days [interquartile range (IQR), 13.3-86] vs 85 days [IQR, 46-138.5], respectively; P = .02) from diagnosis.

The larger inner diameter of LAMSs often facilitates more rapid drainage of liquid contents of the necrotic cavity, possibly exposing the vasculature to the distal flange of the LAMSs and the inflammatory milieu. The close anatomic proximity of PSA in relation to LAMSs was seen in most patients (63%) with indwelling LAMSs at the time of PSA, further supporting the association of LAMSs with the development of PSA.

Regardless of mechanism, the potential for PSA related to LAMSs may occur very early after placement, prompting individualization of the strategy for removal.

In addition, an earlier incidence of PSA is known to occur in the endoscopically centered step-up approach, particularly in those managed by LAMSs, warranting earlier follow-up imaging. Further multicenter prospective studies of this rare entity are imperative to explore other risk factors and advance our understanding of the pathogenesis of PSA in the setting of NP.