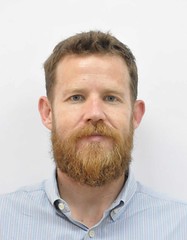 Our study aimed to evaluate the performance of a newly developed AI-based system for polyp detection, DEEP2 (DEEP DEtection of Elusive Polyps) on the detection of elusive polyps, while keeping a low false-positive rate. Elusive polyps were defined as polyps that defied detection by both the endoscopist performing the procedure and the initial offline annotators.

Colonoscopic removal of polyps has been shown to reduce mortality. However, colonoscopy is performed with variable efficiency and quality, with studies reporting up to 28% polyps miss rate. Important factors leading to missed polyps are operator dependent (ie, human factors). An automated real-time polyp detection system that runs during the colonoscopy and alerts the operator to the presence of polyps is an attractive solution.

Remarkably, DEEP2 was able to identify polyps not seen by live real-time endoscopists or offline annotators in an average of .22 polyps per sequence.

For all polyps DEEP2 achieved a sensitivity of 97.1%, with an acceptable false-positive rate of 4.6 false alarms per video. For fleeting polyps (ie, polyps that appear in the FOV for a very brief time), the sensitivity was 88.5% and 84.9% for polyps in the field of view for less than 5 and 2 seconds.

These results were stable in a clinical validation study on 100 procedures where the system detected an average of .89 additional polyps per procedure. 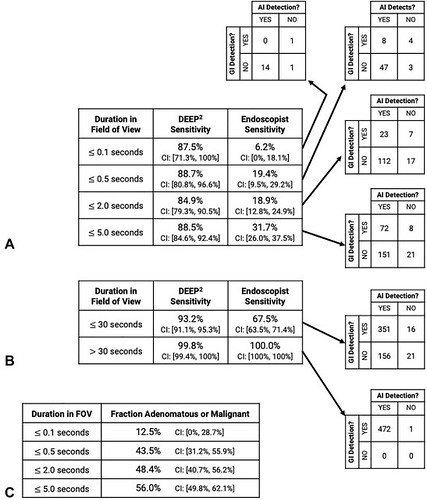 Figure 3. Performance of DEEP DEtection of Elusive Polyps (DEEP2) on fleeting polyps. A, Sensitivity by duration of polyp in the FOV performance of DEEP2 versus endoscopist performance for short durations. The 95% confidence intervals are shown in each case. To estimate the endoscopist performance, offline annotators examined the colonoscopy video and labeled whether the performing endoscopist detected the polyp (and possibly ignored it) or missed the polyp. For each row of the table, we provide a 2 × 2 table showing the number of polyps when either DEEP2 (shortened to “AI”) makes a detection or not (columns) and the endoscopist (shortened to “GI”) makes a detection or not (rows). Note in particular the large numbers when DEEP2 detects and the GI does not versus the opposite case when the GI detects and DEEP2 does not. B, Performance breakdown by a 30-second duration threshold; greater than 30 seconds is taken to be a rough proxy for “histologically confirmed polyps” because these will be examined for some time before resection. DEEP2 has a nearly identical perfect performance as the endoscopists for the polyps with durations above 30 seconds while giving clearly superior performance on the polyps with durations less than 30 seconds. C, Clinical significance of elusive polyps. Based on the labeling of the annotators, it can be seen that a major portion—56.0%—of polyps appearing for less than 5 seconds are clinically significant (ie, either adenomatous or malignant). FOV, Field of view; CI, confidence interval; AI, artificial intelligence.