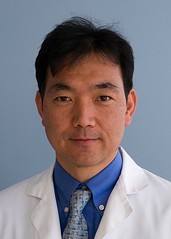 The case described in the video is a 36-year-old man with 10-year history of Barrett’s esophagus undergoing surveillance every 3 years who was referred for endoscopic resection on nodular dysplasia with cancer in the Barrett’s esophagus found the first time at most recent surveillance endoscopy in the absence of local and distant metastasis by radiographic studies. The nodularity was seen in large distribution within the long Barrett’s segment. Area of suspected high-grade dysplasia to cancer was carefully investigated with narrow-band imaging with magnification and volumetric laser endomicroscopy (VLE) with laser markings prior to performing endoscopic submucosal dissection (ESD). Markings at border of lesion was guided by NBI magnification and ESD was successfully completed. Pathologically, it was curative resection (7x7cm, R0, differentiated cancer, sm1 with no LVI).

Endoscopic resection for nodular dysplasia in Barrett’s esophagus is usually guided by advanced endoscopic imaging with high sensitivity for HGD-EAC. VLE is a new diagnostic tool that offers high-resolution images of the surface layers in the esophagus, and newly added in-vivo computer-enhanced visualization (IRIS™) appears promising to highlight HGD-cancer area in impressive “fly-through” and “en face” views. Since ESD provides un-disrupted large specimens that makes image-pathology correlation feasible and more precise, we felt it was the best opportunity to evaluate the new technology comparing to the current practice standard. As shown in the video, NBI-guided marking was accurate to offer guidance for R0 resection. Deepest invasion was suspected at depressed area with irregular mucosa/vascular pattern that corresponded to SM cancer. However, distribution of intramucosal cancer was much wider than seen by NBI and much better shown by VLE feature (hyperreflective layer). Fly-through view strikingly correlated with endoscopic view highlighted by VLE features that suggested HGD cancer.

We have shown the new visualization mode of VLE for patients with Barrett’s-related neoplasms correlating with pathological findings. NBI magnification offers high accuracy for demarcating dysplasia in expert hands but is limited by the superficial nature of examination. VLE may add confidence of localization of HGD cancer and help discovery of subsquamous HGD cancer as seen in the video; however, real value of VLE in addition to current standard is yet unknown. We believe further investigation to explore additional value of VLE with IRIS is warranted.

We would like to point out that the highlighted individual VLE features shown by IRIS does not represent HGD cancer by itself (not one to one correlation) and a confirmation of abnormality is mandatory by reviewing VLE images. Overlapping abnormalities of 2 or more of lack of layering, hyper-reflective surface, and hypo-reflective structures above layer suggested HGD cancer as reported previously. VLE is not accurate in the cardia of stomach and distal margin determination needs endoscopic advanced imaging.