Post written by Vivek Kumbhari, MD, from the Department of Medicine and Division of Gastroenterology and Hepatology, The Johns Hopkins Medical Institutions, Baltimore, Maryland, USA. 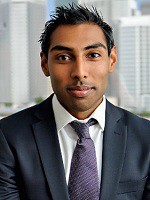 The metabolic improvements seen in bariatric surgery are out of proportion to what one would expect from weight loss alone. The underlying mechanisms that result in these changes are largely unknown but are thought to be related to more than just a change in the volume of the stomach. Post bariatric surgery, aside from a reduction in gastric volume, there is a reduction in the amount of gastric mucosa that is in contact with food.  In our previous work in a rat model, we have demonstrated that the gastric mucosa is a complex regulator of food intake as well as glucose and lipid metabolism. Based on the positive of the rat the study, we sought to test the efficacy, feasibility, and safety in a large animal model. Therefore, we performed a RCT comparing gastric mucosal devitalization (GMD) to sleeve gastrectomy (SG) and a sham cohort (SH).

The endoscopic weight-loss community (physicians, biomedical engineers, industry) has placed a significant emphasis on methods to reduce the effective volume of the stomach (intragastric balloons, endoscopic sleeve gastroplasty, etc). Although these techniques result in clinically significant weight loss, they do not yet have a robust impact on obesity-related comorbidities. For endoscopic bariatric therapies to become the new standard of care for obesity, the focus of innovation needs to move to one where there is a significant reduction in visceral adiposity and, therefore, obesity-related comorbidities as opposed to simply weight loss alone. 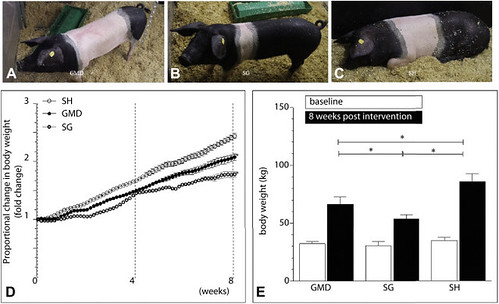 Figure 4. Gross appearance and body weight outcomes 8 weeks after the intervention. There was a visible difference in the appearance of the pigs in the 3 groups at 8 weeks; the GMD (A) and SG (B) pigs were relatively smaller than the SH pigs (C). A significant reduction in mean proportional body weight between GMD and SH was seen at weeks 4 and 8 (D). There was no significant difference between SG and GMD at 4 weeks although a difference did exist at week 8 (D). The difference in mean absolute body weight between baseline and week 8 illustrates that both GMD and SG pigs had less weight gain compared with SH pigs and that SG was statistically superior to GMD (E). GMD, Gastric mucosal devitilization; SG, sleeve gastrectomy; SH, sham.

GMD was technically feasible and resulted in relative weight loss and an improvement in visceral adiposity. The benefits noted were out of proportion to what would be expected with weight loss alone.