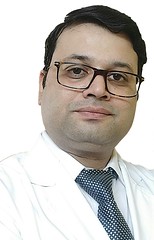 A 3-year-old girl presented with a history of constipation since early infancy. Anorectal manometry was performed, and the absence of recto-anal inhibitory reflex raised the suspicion of Hirschsprung’s disease (HD). To confirm the diagnosis of HD, rectal biopsy was planned. After discussion with the parents, we performed an endoscopic biopsy on this child. The procedure was performed under light sedation, with the child in left lateral position. In brief, the steps of endoscopic biopsy were as follows: rectal mucosa was thoroughly washed for any residual fecal matter, submucosal injection of 5 cc saline mixed with diluted indigocarmine dye was given at a distance of about 3 cm from anal verge along posterior rectal wall, the injected site was suctioned and single band was deployed using the standard band ligator device, and polypectomy snare was used to cut the polyp created in the previous step. The polypectomy site was carefully examined for any bleeding or deep thermal injury. The specimen was sent for histopathologic examination which revealed adequate inclusion of submucosa. Ganglion cells were identified with hematoxylin and eosin staining. Immunohistochemistry was performed on the biopsy specimen which further confirmed the presence of ganglion cells. Therefore, the diagnosis of HD was excluded in this child.

The techniques used to obtain rectal biopsy specimens in children with HD include rectal suction biopsy and full-thickness rectal biopsy. Rectal suction biopsy does not provide adequate tissue specimens in some cases. On the other hand, full-thickness biopsy is more invasive and requires hospitalization. Therefore, there is an unmet need for a procedure that is not only minimally invasive, but also provides sufficient tissue for diagnosis in these cases. This video demonstrates the technique of endoscopic biopsy in a child with suspected HD. This technique can be safely used in children for the evaluation of HD.

Endoscopic mucosal resection using banding device (Band EMR) is commonly performed in adult patients for upper gastrointestinal lesions like dysplastic Barrett’s esophagus, small neuroendocrine lesions. The technique of band-EMR is easy and does not require much expertise. The procedure can be performed in outpatient settings without requirement for hospitalization. Moreover, it provides an adequate specimen for accurate histopathologic diagnosis.

EMR can also be performed using a transparent cap with a pre-looped snare. This technique has been shown to be superior than rectal suction biopsy for evaluating constipation and dysmotility in adult patients. The rectal wall is thinner in small children as compared to older children and adults. Therefore, submucosal lifting injection was used in our case. For the same reason, submucosal lifting injection may not be required in older children and adults. This technique should be further evaluated and compared with existing techniques like rectal suction biopsy.