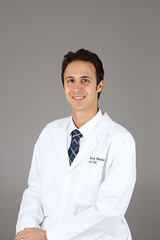 Surgical intervention has remained the accepted salvage therapy for patients with pancreatic fistula refractory to conservative management and stenting. However, surgical treatment of fistula is complex and carries significant morbidity. Endoscopic closure of fistula using cyanoacrylate glue has been proposed as a minimally invasive alternative to surgery; however, migration of the glue plug remains a common complication of this technique and failure has been reported in up to 30% of cases. Our team theorized that placing a small metallic coil in the pancreatic duct at the sight of leakage might provide a scaffold for glue injection, thereby preventing migration of the glue.

The patient is a 47-year-old man who underwent extensive abdominal surgeries after a gunshot wound to the abdomen. His injuries included severe parenchymal and ductal injury to the pancreatic tail, requiring distal pancreatectomy. Significant drainage of amylase-rich pancreatic fluid was noted in his surgical drains a week after surgery. Endoscopic retrograde pancreatography (ERP) was performed, which confirmed a leak at the pancreatic stump and a 5-French by 7-centimeter stent was placed. Drainage of >1 liter per day of pancreatic fluid continued despite stent placement. Due to his critically ill state and multiple previous surgeries, it was felt that a minimally invasive therapy was preferable over surgery. We elected to perform ERP-guided closure of the fistula.

The pancreatic duct was accessed with a 5-French tapered tip cannula and a 0.018-inch metallic guidewire, and the site of leakage at the stump was identified by contrast opacification. The catheter was exchanged for a 3-French catheter, which was positioned just downstream to the site of leakage. Using a pushing wire, a 2-mm x 5-mm fibered platinum coil was deployed at the site of leakage. Subsequently, 0.5 cubic centimeters of a 1:1 mixture of NBCA glue and Lipiodol was injected directly at the coil, which was visualized fluoroscopically. A 5-French by 7-centimeter pancreatic stent was placed to decompress the duct. 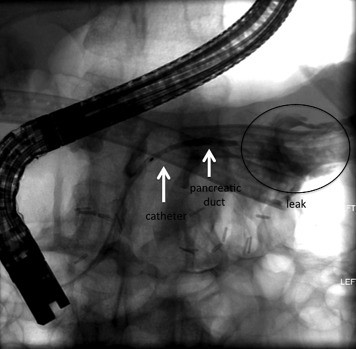 Drain output decreased steadily over the following week and was subsequently removed. The pancreatic stent was removed after 4 weeks, and follow-up imaging at 6 months did not demonstrate any fluid collection.

This case acts as a proof of concept, demonstrating that a recalcitrant post-surgical pancreatic fistula can be successfully sealed with ERP-guided placement of a metallic coil and NBCA glue. We hypothesize that the coil may act as a scaffold for glue polymerization, which may prevent migration of the glue plug. Further study is needed to determine the safety and efficacy of this technique.