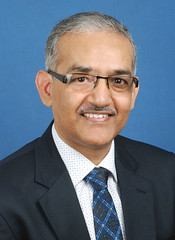 Conventional EUS-BD approaches by trans-duodenal and trans-gastric route were not feasible due to presence of multiple large peri-choledochal collaterals and unfavorable alignment of dilated segment 3 bile duct. Hence, EUS-guided trans-esophageal route was used for biliary access through a carefully selected relatively avascular area in lower esophagus between varices using 19G FNA needle to enter segment 2 bile duct. A guidewire was negotiated into the distal CBD through the hollow of the FNA needle. Tapered stiff cannula was then passed over the guidewire across the esophageal wall and hepatic parenchyma (cautery less dilation) into the distal CBD so as to manipulate the guidewire across the papilla. Echo-endoscope was then exchanged with duodenoscope, followed by wire-guided CBD cannulation beside the ante-grade passed projecting guidewire (parallel biliary rendezvous). After successful CBD cannulation, self-expandable metal stent was placed without biliary sphincterotomy. Esophageal puncture site was then inspected carefully with gastroscope, which did not reveal any signs of variceal bleeding.

In this video case, we used non-conventional ‘trans-esophageal route’ for EUS-guided biliary access. Commonly used trans-duodenal and trans-gastric access routes were technically not feasible. Trans-esophageal route of EUS biliary access is generally not considered due to associated risk of mediastinitis or esophageal perforation. In this case, presence of esophageal varices added to the degree of difficulty. EUS guidance helped to select a relatively avascular site in esophagus for needle puncture.

The whole procedure was completed without the use of electro-surgery. Cautery was not used at both crucial steps, dilation of the entry track (to avoid perforation or bleed from esophageal varices) or for biliary sphincterotomy (to avoid risk of bleed from peri-biliary varices) prior to SEMS placement. Although antegrade biliary SEMS placement was technically possible, we preferred retrograde placement to avoid any possibility of the puncture site enlargement.

Overall, in patients with malignant distal biliary stricture with portal cavernoma and esophago-gastric varices and ascites, trans-esophageal biliary rendezvous route and retrograde stenting without the use of cautery may be considered to avoid adverse events. EUS-guided biliary access can be performed by trans-esophageal route in exceptional circumstances, when conventional trans-gastric or transduodenal routes are not available or technically not feasible, like in this case of portal hypertension due to pancreatic head tumor associated with portal cavernoma, leading to large size collaterals precluding the standard EUS-BD approach.

Use of cautery may be avoided for creation of fistula at entry point or for biliary sphincterotomy, to avoid any bleed in case of intervening vessels, collaterals, or portal hypertension.

The caliber of the entry puncture site in esophagus may increase due to repeated passage of accessories or thicker devices (large caliber balloon, bougies, or stent) that may result in local complications like mediastinitis or esophageal perforation, or in this case, bleeding from esophageal varices. Hence, retrograde biliary SEMS (instead of antegrade) placement can be considered.