A 4-year-old Indian boy presented with recurrent biliary colic and jaundice for 2 weeks. Laboratory investigations revealed obstructive jaundice. Abdominal ultrasonography (USG) revealed a normal gallbladder, intrahepatic biliary radicles dilation, and a dilated common bile duct (CBD) of 14 mm with an ill-defined rounded echogenic shadow inside the lower end of CBD. Endoscopic ultrasonography (EUS) was performed before endoscopic retrograde cholangiopancreatography (ERCP) to know the aetiology of dilated CBD and further characterization of echogenic shadow seen on USG. Linear EUS from the stomach revealed dilated CBD (14 mm) with rounded hyperechoic structure without acoustic shadowing in the lower CBD. Linear EUS from duodenal bulb with color Doppler imaging showed hyperechoic avascular structure with a central anechoic area inside the CBD. This structure was without acoustic shadow, and it appeared to be attached to the wall of the CBD from one discrete attachment point, while the remaining structure was noted to move with the pulsatile flow of biliary secretions. The central part of this structure was anechoic. After biliary sphincterotomy and multiple balloon sweeps on ERCP, yellow colored fragments were removed suggestive of recently fragmented Ascaris. Stool examination revealed eggs of Ascaris lumbricoides. Microscopic examination of the removed fragments showed features of Ascaris lumbricoides. 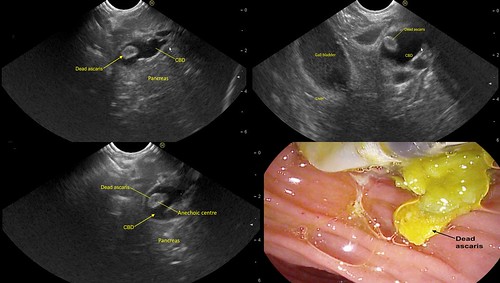 Ascariasis is a common problem in tropical regions. Live Ascaris worms are usually diagnosed on USG or EUS showing characteristic features of linear mobile echogenic structure with central anechoic lumen. However, in the present case, the anechoic lumen was not seen as the lumen disappears once the worm dies and coiling can occur as the worm shrivels up and becomes smaller. The diameter of the coiled structure in the present case was 8 mm, while a live worm is generally 8 to 10 cm long. Ascaris worms can die inside the bile duct and create a foreign body which can act as a nidus for stone or sludge formation.

Obstructive jaundice due to dead Ascaris is a rare but an important cause in the developing world. As the worm shrivels up after death, accurate identification requires a high index of suspicion. The characteristic features of a dead worm on EUS includes hyperechoic structure without any acoustic shadow. A coiled dead Ascaris worm on EUS shows the appearance of hyperechoeic avascular structure with a central hypoechoeic area inside the CBD.

EUS is the most sensitive investigation for evaluation of a dilated CBD and can improve the sensitivity of diagnosis of pancreaticobiliary ascariasis.