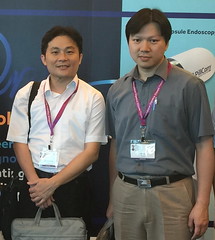 Our study focused on the efficacy and safety of radiofrequency ablation (RFA) for early esophageal squamous cell neoplasias (ESCNs) in patients with well-compensated cirrhosis accompanied by esophageal varices. Heavy alcohol consumption is a well-known cause of esophageal cancer and liver cirrhosis, and thus, patients with alcoholic cirrhosis associated with superficial esophageal cancer spreading over esophageal varices have been increasingly reported. Although endoscopic resection is a well-established treatment modality for ESCNs, treating ESCNs with esophageal varices is challenging because of the risk of hemorrhage. As a result, most endoscopists are hesitant to use this procedure. Endoscopic radiofrequency ablation (RFA) is a rapidly evolving therapeutic modality, and recent studies have shown its efficacy and safety in eradicating dysplastic Barrett’s esophagus, as well as flat-type early ESCNs. However, the feasibility regarding its use in the setting of esophageal varices and cirrhosis has not previously been reported. Therefore,  we conducted this pilot study to evaluate the outcome, neoplastic progression rate, and adverse events of balloon-type RFA in treating ESCNs on or adjacent to esophageal varices. 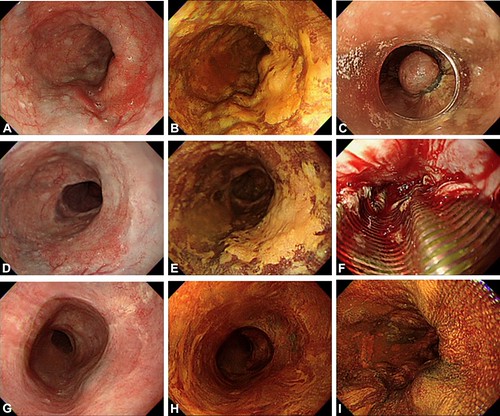 Figure 2. A representative patient (case 3) with early ESCN on large esophageal varices. A, Conventional white-light imaging showing a flat reddish lesion on several large varices. B, Lugol staining showing a Lugol-voiding lesion occupying half of the esophageal circumference with a mosaic small Lugolvoiding background. C, Two months before the RFA procedure, band ligation was performed to eradicate the varices. D and E, White-light and Lugol chromoendoscopy imaging showing that the varices had become flattened. F, Circumferential RFA was performed, and easy bleeding was noted when moving down to another diseased segment. However, the bleeding stopped spontaneously after the procedure. G and H, One month after primary RFA, the epithelium had almost recovered with ulcer scaring. I, At 12 months, Lugol staining showed no residual lesions. ESCN, esophageal squamous cell neoplasia; RFA, radiofrequency ablation.

We retrospectively enrolled 8 consecutive patients with cirrhosis (Child-Pugh score ≦6) with early flat-type ESCNs (high-grade intraepithelial neoplasia/intramucosal cancer and Lugol unstained lesion length ≧3cm extending ≧1/2 the circumference) on or adjacent to esophageal varices. After RFA, all of the ESCNs were eradicated at 12 months, and the safety profiles were satisfactory. No neoplastic progression or recurrence occurred during the follow-up period (median: 21.6 months). Although the adverse event  (2 intramural hematomas, 1 mucosal laceration) rate was higher than that reported for patients without cirrhosis who received RFA, all of the adverse events were self-limiting and acceptable.

Our results indicate that RFA may be an alternative treatment modality for patients with early flat-type ESCNs that concomitant with esophageal varices. Several studies have reported that the maximal ablation depth of RFA should reach the muscularis mucosa layer only, and thus theoretically it should be safe for superficial neoplasias over the esophageal varices, which are located in the submucosal layer. Based on our results, the application of RFA may not injure the varices, using double ablation with or without a cleaning regimen. Both regimens are effective and had a good safety profile. However, the major concerns of RFA is no specimen to evaluate the curability after ablation, and thus an optimal staging workup before the RFA procedure is of paramount importance. This pilot study is limited by the relatively low number of cases from a single institution. A large-scale study with long-term follow-up is required to validate our findings.