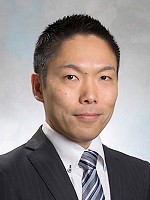 Two technically challenging endoscopic submucosal dissection (ESD) cases are described in this video. The first gastric ESD was complicated by prior tattooing and incomplete resection, which caused significant submucosal fibrosis. In this case, a “suture-pulley” countertraction method was performed by using an endoscopic suturing device. The second colonic ESD case was complicated by previous tattooing and angulation, resulting in a perpendicular angle of the ESD knife to the muscle layer. A “rubber band traction” method was chosen in this case. This method uses a 5-mm nonlatex rubber band and a suture loop (3-0 monofilament suture) that can be delivered through the endoscope channel. Both of these countertraction methods facilitated successful ESD without major adverse events. 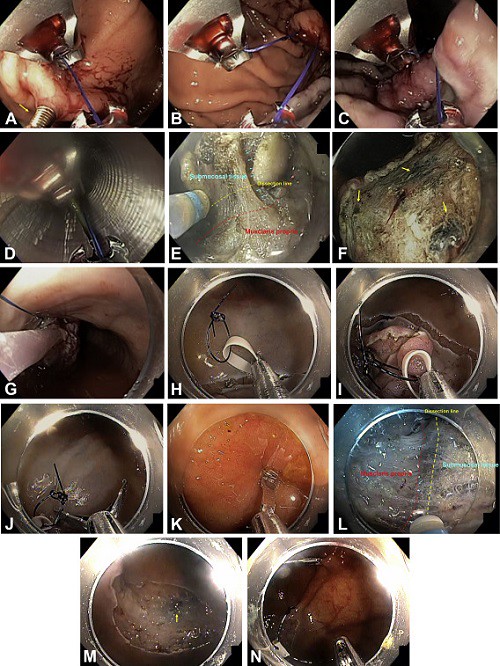 Figure 1. A, The first stitch was placed at the wall opposite to the lesion. A helical grasper (arrow) was used to ensure placement of the thickness suture. B, Suture slack was made to allow for the second stitch. C, The second stitch was placed at the edge of the lesion, proximal to the endoscope. It is critical to make sure that the muscularis propria is not involved by the needle. D, The scope was withdrawn, and the suture end was held with a hemostat outside the patient’s body. E, The suture-pulley method provided a wider view of the dissection plane. The dissection line is indicated in yellow. F, Multiple tattooed areas are noted at the ulcer bed (arrows). G, The specimen was successfully retrieved with a net together with the attached anchor and suture. H, After being held by a reopenable hemoclip, a 5-mm small rubber band attached to a 5-mm suture loop (3-0 nylon suture) was passed through the scope channel. I, The rubber band was fixed at the edge of the lesion with a hemoclip. J, The tip of another hemoclip was used to pick up the suture loop. Then the suture loop was directed to the opposite wall. K, The clip was deployed at the opposite wall, and the suture loop was successfully fixed. L, The rubber band method effectively applied countertraction to the lesion. Dissection line is indicated in yellow. M, The lesion was successfully removed in en bloc fashion. (Tattooed area, arrow.) N, The suture loop was cut with endoscopic scissors, and the specimen was retrieved.

ESD allows en-bloc resection of GI tumors regardless of lesion size or location. However, extensive biopsies, partial endoscopic removal, and tattooing of these lesions are routinely performed in the United States, and these maneuvers lead to submucosal fibrosis, making subsequent ESD technically challenging. This video demonstrates how countertraction techniques facilitate successful en-bloc lesion removal by allowing direct view of the submucosal dissection plane in such cases.