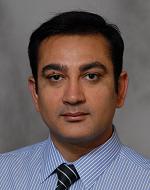 Rajeev Attam, MD from the Division of Gastroenterology at the University of Minnesota in Minneapolis, Minnesota, USA describes this VideoGIE case “Single-session, transgastric ERCP using sutured gastropexy for treatment of pancreatic duct leak in a patient with Roux-en-Y gastric bypass anatomy and pancreatic divisum.”

Our video case describes transgastric ERCP in a patient with Roux-en-Y (RYGB) anatomy and pancreatic divisum, who presented with pancreatic duct leak after an episode of necrotizing pancreatitis. A patient presented to our institution with left upper abdominal fluid collection and sepsis after an episode of acute pancreatitis. The fluid was drained using percutaneous catheter placement. Amylase of fluid was high suggesting pancreatic duct leak. ERCP was attempted as the catheter drainage persisted after a few days. ERCP was first attempted using deep enteroscopy. Major papilla cannulation revealed pancreatic divisum. Minor papilla could not be located on enteroscopy. MRI obtained after the procedure confirmed presence of pancreatic divisum.

Single session, transgastric ERCP through gastrostomy placed using sutured gastropexy was then attempted. The stomach was accessed in retrograde manner using deep enteroscopy and site for gastrostomy chosen in usual manner. A secure gastrostomy was created using sutured gastropexy to allow passage of a duodenoscope and subsequent canulation of minor papilla. Injection of contrast revealed leak from pancreatic tail which was treated by placement of a pancreatic stent. 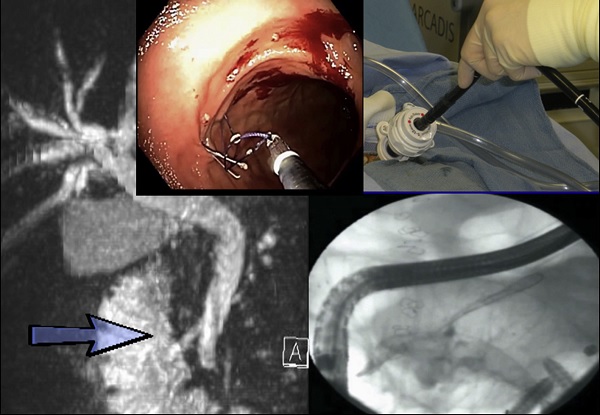 ERCP in patients with RYGB anatomy is technically difficult and challenging. Deep enteroscopy is one option to reach descending duodenum but successful cannulation is limited by the lack of a side viewing endoscope, improper orientation of the papilla and lack of an elevator to aid cannulation. In this patient with pancreatic divisum, locating and canulating the minor papilla was not possible using a forward viewing endoscope  hence transgastric ERCP was planned. The conventional technique of transgastric ERCP using retrograde gastrostomy requires a period of few weeks between creation of gastrostomy and attempt at ERCP to allow the gastrostomy to mature.

We were able to perform single session transgastric ERCP by creating a secure gastrostomy using sutured gastropexy. Suture gastropexy is a novel technique that was developed by our group using readily available laparoscopic suture passing needle. By placing full thickness, four quadrant sutures we were able to secure the gastric wall to anterior abdominal wall and prevent their separation as the duodenoscope is advanced to descending duodenum. This technique allows for single session procedure, thereby reducing the overall cost and preventing unnecessary delay in treatment.

Transgastric ERCP using suture gastropexy provides another option in patients with RYGB anatomy. It provides for a single session procedure without having to wait for gastrostomy to mature.