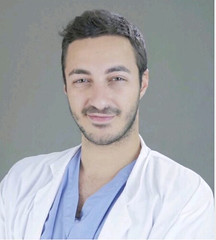 A 54-year-old came to our attention for a follow-up colonoscopy. During the exam we visualized in the rectum a granular homogeneous lateral spreading tumor (LST), macroscopically covered by typical gastric mucosa, extending on the right luminal wall 10 cm proximal from the dentate line. We performed the examination using a computer-aided detection (CADe) and diagnosis (CADx) (CAD-EYE, Fujifilm). CADe is conceived to signal the area where a suspicious polyp is detected while CADx system define this area in terms of “hyperplastic/neoplastic.” Our CADe system was tricked by the unrecognized lesion and sent random outputs on different sites within the LST but never included the entire lesion. The CADx system was also tricked by the tissue pattern, alternating neoplastic/hyperplastic signals. We therefore proceeded to endoscopic submucosal dissection (ESD). After marking the lesion circumferencially and injecting methylene blue and physiologic solution, we performed distal-to-proximal submucosal tunnelization of the lesion that was then used, thanks to the retroversion maneuver, as a traction aid for completing dissection of the lateral unresected margins to achieve complete en bloc dissection. The resulting eschar appeared satisfactory. Final histology showed superficial gastric columnar epithelium with antral oxyntic glands, with edema and mild chronic inflammation.

This case report has 2 main, equally important focuses. The first one being the management of an extremely rare lesion and the significantly complex technical procedure we performed to resect it. The second focus being the usage of CADe/x system on such rare lesion.

Heterotopic gastric mucosa are extremely rare lesions, less than 100 cases have been reported. The presented lesion is the largest HGM ever described: it presented as a granular homogenous lateral spreading tumor that extended half circumferentially for 10 cm. The procedure of choice was endoscopic submucosal dissection (ESD), which is well known for its technical complexity. Nevertheless, other than for its dimension, the procedure was even trickier because of the position and the involvement of the dental line, which led us to use, through the tunnelization, the retroversion maneuver as a traction system for completing the lateral margins resection. The other learning takes into account the CADe/x performance on a rare lesion. These systems are trained through a process called deep learning, based on large datasets that include many instances of typical lesions. On one hand this implies that common lesions, naming hyperplastic and adenomatous lesions, seem to be correctly detected and characterized, but on the other hand, peculiar lesions, such as the one showed in this case report, are so rare that there are not enough images to create a dataset trough which CADe/x system can learn and therefore perform correctly on it, meaning that these systems do not work on rare lesions.