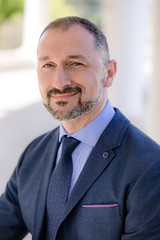 A 26-year-old man presented with a 2-week history of nausea and vomiting. His medical history was significant for recurrent pancreatitis secondary to hypertriglyceridemia, infected walled-off necrosis requiring cystogastrostomy, splenic vein thrombosis resulting in severe portal hypertensive gastropathy, and large gastric varices treated by splenic artery embolization followed by splenectomy. He later experienced chronic pancreatitis and pseudocyst that was treated with a second cystogastrostomy. He had pancreatic and biliary duct strictures that had been treated with stent placement.

Abdominal CT showed a severe stricture at the proximal jejunum. Owing to his chronic pancreatitis and his previous complicated splenectomy, he was deemed by the surgical team to be at a higher risk for adverse surgical events. An upper-GI study with contrast revealed a long high-grade stricture at the proximal jejunum. The jejunal loop past the stricture appeared to be in close proximity to the third part of the duodenum. After multidisciplinary discussion with the patient and the surgical team, a decision was made to proceed with EUS-guided duodenojejunostomy.

Upper endoscopy was performed, and the adult gastroscope was not able to pass the stricture. A 0.035-inch jagwire could not pass the stricture either. With difficulty, we were able to traverse the stricture with a pediatric gastroscope all the way to the proximal jejunum. A linear echoendoscope was passed on the side of the pediatric gastroscope to segment 3 of the duodenum. The target jejunal loop was distended with contrast material by use of the gastroscope water pump. A 20-mm × 10-mm LAMS was advanced into the lumen of the jejunum by use of electrocautery. The stent was deployed under EUS and endoscopic guidance. The stent was then dilated up to 2 cm.

The patient experienced no adverse events. He was discharged with instructions to use a soft diet. A postoperative upper-GI study showed a successful duodenojejunostomy bypassing the stricture. At a follow-up visit 2 months later, he continued to do well. Our plan is to replace the LAMS after 5 to 6 months.

The pediatric endoscope was a valuable tool to expand the target bowel loop in this case. The wire could not initially traverse this stiff and narrow stricture. As a result, we could not utilize a nasobiliary drain to expand the target bowel loop. The pediatric endoscope was stiffer than the wire to overcome the stiffness of the stricture, yet slim enough to traverse this narrow stricture under direct visualization. However, the most challenging part of the procedure was getting the pediatric endoscope tip to reach the proximal jejunum. This was aided by abdominal compression and position changes.