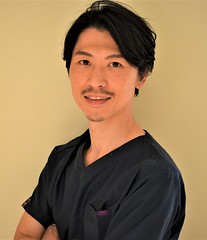 A 72-year-old man was found to have a large protruded tumor measuring approximately 60 mm in diameter in the duodenal bulb. He underwent ESD under general anesthesia in the operating room. After local injection of sodium hyaluronate solution, initial mucosal incision and submucosal dissection were performed using a Dual knife J 1.5 mm on retroflexed view. However, the large protruded tumor occupying the naturally narrow duodenal bulb reduced the working space of the endoscope, resulting in poor maneuverability of the endoscope. Moreover, in the retroflexed view, the tip of the dual knife was seen vertically positioned to the muscle layer, which could pose a potentially high risk of perforation. Therefore, we replaced the Dual knife J with Clutch Cutter 3.5 mm (Fujifilm Co, Tokyo, Japan). Finally, the lesion was resected en bloc without any adverse events in 80 minutes. The mucosal defect extended nearly circumferentially along the duodenal bulb. At 1-month follow-up, the mucosal defect after ESD was healed without stricture of the pyloric ring. Histopathological examination revealed that the lesion was a well-differentiated intramucosal cancer with no lymphovascular invasion and had negative margins (tumor diameter, 60 × 42 mm).

Recently, endoscopic submucosal dissection (ESD) has been applied for the treatment of gastrointestinal lesions to enable en bloc curative resection. Generally, large tumor size, protruded lesion, poor maneuverability of the endoscope, etc, are named as factors contributing to technical difficulties and periprocedural perforation during ESD. Among ESD procedures for lesions in different parts of the gastrointestinal tract, duodenal ESD is the technically most challenging procedure due to the thin wall and narrow lumen of the duodenum, as well as poor maneuverability of the endoscope in the duodenum. Herein, we report successful en bloc and curative resection of a duodenal lesion presenting with all of the above-mentioned difficulties associated with ESD by using a scissor-type knife and submucosal dissection method. Our case strongly suggests that such an operational technique can be useful as one of the strategies for applying ESD to duodenal lesions that are associated with high levels of procedural difficulties, especially lesions within the duodenal bulb, thus possibly leading to a reduction in the number of cases of surgical resection of duodenal lesions.

The creative strategy in ESD of selecting an electrosurgical knife such as a scissors-type knife suitable for the operational situation accomplished safe and complete resection to avoid surgical resection, even in a technically highly difficult case of duodenal lesion.