A 20-year-old man presented with right-upper quadrant abdominal pain for 2 months. He had undergone Ultrasound (US)-guided aspiration of a liver abscess 2 months previous. US of the abdomen showed a hepatic artery aneurysm. CT angiography (abdomen) confirmed a saccular pseudoaneurysm arising from the proximal part of the hepatic artery. After discussion of the pros and cons of the EUS guided procedure, EUS-guided coil embolization of pseudoaneurysm was considered. Packing the aneurysm-sac with helical coils was planned. Packing with one 10-mm coil and five 6-mm coils through a 19-gauge needle caused 80% obliteration of the sac. Five days later, EUS assessment showed that the injected coils were collected into the most distal part of the aneurysm, but the flow into a smaller cavity continued with high velocity. During the second attempt, four 10-mm coils were deployed. EUS assessment after coiling still showed a flow into the aneurysm. Three more 8-mm coils were placed, and complete obliteration of the aneurysm was confirmed by the injection of contrast material and EUS. One week later, follow-up color Doppler of the abdomen showed no flow in the pseudoaneurysm. 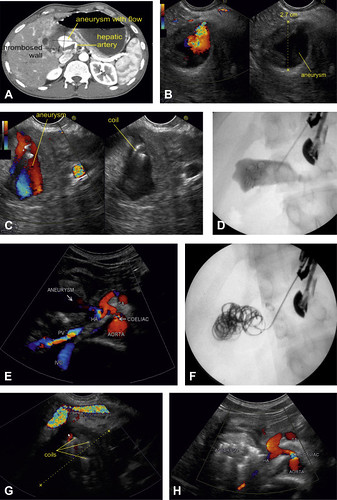 The standard description of the sac packing technique for pseudoaneurysms of interventional radiology does not describe any specific size of coils. We initially employed 1 large coil and 5 smaller coils at 2 different places in the aneurysm. The intention of placing small coils near the neck was to obliterate the neck. Retrospectively, we could have used more coils at the index procedure or added thrombin in the later part of the procedure. After performing EUS guided angiotherapy of pseudoaneurysms in 6 more cases, we have found that more large coils should be used at the index procedure one by one.

As per interventional radiology papers and protocols, the target of pseudoaneurysm obliteration is around 80-90%. The obliteration of 80% of the lumen was attempted with the 6 coils initially. However, at the end of the first-stage procedure, about 50% obliteration was achieved as the coils were collected into 1 part of pseudoaneurysm. The lesson learned in a nut-shell was that smaller coils will not obliterate the neck by EUS-guided technique, and larger coils should be packed one after another until the whole aneurysm is obliterated in the first stage itself.

Peripancreatic pseudoaneurysms are usually managed by interventional radiology or surgery. There are few case reports in the literature of EUS-guided thrombin injection of pseudoaneurysms. EUS-guided angiotherapy has potential advantages like close contact with the pseudoaneurysm and therefore avoiding the risks of crossing multiple loops of bowel, and varices where present. It also allows ease of access to a pseudoaneurysm either obscured by bowel gas on transabdominal ultrasound or difficult to locate in an obese patient. It is a minimally invasive, day-care procedure with conscious sedation and quite useful in poor surgical patients. Real time with color Doppler allows immediate assessment of obliteration of pseudoaneurysms. Interventional endosonographers need to explore further in this area.