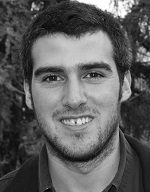 Post written by Diogo Libânio, MD, from the Gastroenterology Department at the Portuguese Oncology Institute of Porto, Porto, Portugal

The focus of our study was the identification of significant risk factors for bleeding after gastric endoscopic submucosal dissection (post-procedural bleeding). Additionally, we aimed at accurately estimating the proportion of patients in whom this adverse event develops and at gathering information about when the risk is higher (in the first hours after the procedure or several days after). We also focused on evaluating the effect of preventive measures to prevent this adverse event such as proton-pump inhibitors, selective artery clipping or ulcer closure/shielding.

We felt that this issue was unsolved and controversies existed in the literature. Several studies were performed and published aiming at identifying risk factors for post-procedural bleeding after gastric ESD. However, some results were contradictory between the studies, and small studies are generally underpowered to detect significant differences in risk factors for an adverse event that happens in about 5% of the procedures. We believe that our study allows providing patients with a better estimate about the individual bleeding risk and helps gastroenterologists in the identification of patients with a higher bleeding risk who may benefit from additional preventive measures. 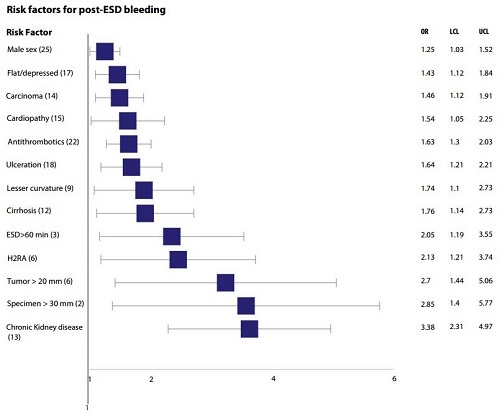 Significant risk factors for post-procedural bleeding were identified, some related with the patient and comorbidities (male sex, chronic kidney disease, cirrhosis, cardiovascular disease and antithrombotic medications) and some related with lesions’ characteristics (flat/depressed morphology, localization in the lesser curvature, carcinoma histology, ulcerative findings and larger lesion size [≥20mm]. Some peri-procedural factors also appear to influence bleeding risk, such as a procedural time greater than 60 minutes and the use of histamine-antagonists as acid inhibitors (figure).  We believe that the next step is the development of a risk score to stratify bleeding risk, towards individualized medicine and health-delivery. This could help in the selection of patients who need a more prolonged in-hospital surveillance (in contrast with an earlier discharge for those with a negligible bleeding risk) and guide the use of additional preventive measures.